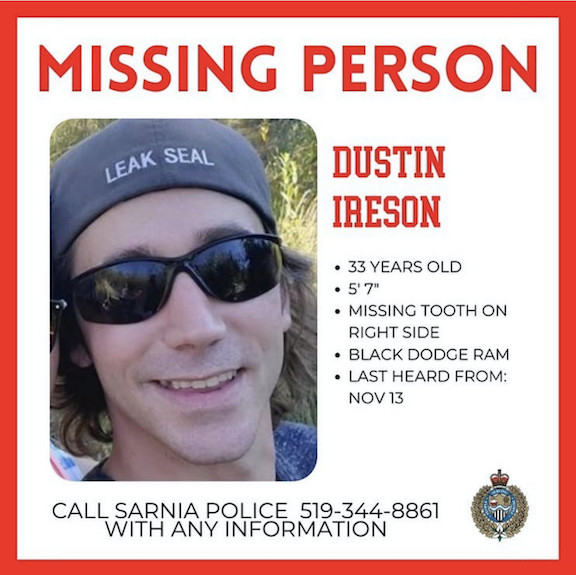 Police continue to search for a 33-year-old Sarnia man whose family says they haven’t heard from him in more than two weeks. Dustin Ireson was reported missing on Monday and is described as 5’7” with long brown hair, and missing a tooth on the right side of his mouth.

“Sarnia Police conducted a search and will continue searching this area making every effort to locate Dustin Ireson,” the release stated.

His family hasn’t heard from him since Nov. 13, police said.

Last week, police reported that 40-year-old Trevor Morley was missing. He was last seen along Sarnia’s waterfront in the earlier morning hours of Nov. 22.

Police say he was along the riverfront in the area of Imperial Oil and the gravel docks (end of Devine Street off Christina Street).

Members of the Emergency Response Team and Criminal Investigation Branch were searching along the St. Clair River, between the gravel docks at the west end of Devine Street, southbound to LaSalle Line.

The service’s Criminal Investigations Division has been investigating Chaput’s disappearance since July 6 2022, when family members reported him missing.

Police are treating his disappearance as suspicious.

Sarnia-Lambton Crime Stoppers has doubled the maximum reward to $4,000 for information leading to an arrest or Chaput’s location. He is described as approximately 5’6” and approximately 160 pounds (thin build).

Anyone with information should contact Sarnia-Lambton Crime Stoppers at 1-800-222-8477. Information can also be directly provided to the Sarnia Police by contacting Detective Constable Tyler Callander at 519-344-8861 ext. 6193.